The Rev. William George Washington Smith led the church from 1881 until 1891. Under his governance, the current Queen Anne Revival building was constructed in 1885. Reverend Smith himself built the altar rail, the bishop’s chair, and the lectern. The members built the pews, which are still in use. By all accounts, Rev. Smith was energetic and a visionary, leaving the church only when his health demanded it. The church declined after his departure.

Historical records show the church mostly vacant from 1901-1925, with Bishop Quin holding services once a year. A succession of non-resident rectors attempted to keep the church going for the small group of Episcopalians who made La Grange their home. In 1917, the Rev. J. Cross Gray tried to lead the congregation but noted that “the tower had been the home of bats and birds for twenty years, and the roof broken in at many places. The carpet, the sanctuary, and the chancel were so dirty that their designs were unrecognizable. The organ was in such shape that it would play when it ought not and would not play when it ought.” (Houston Daily Post 1918). At the turn of the 20th century, rural Texas was losing its youth to the growing cities of Houston, Dallas, and San Antonio. The population of La Grange fell from 2,392 in 1900 to 1,669 in 1920. Even the rector of St. James’, Rev. Gray, became discouraged and left the Episcopal Church to become a Presbyterian minister. In 1921, with only nine members and no full-time rector, St. James’ lost its status as a parish and was demoted to mission status, effectively making it a ward of the diocese. It remained a mission church for the next fifty-eight years. 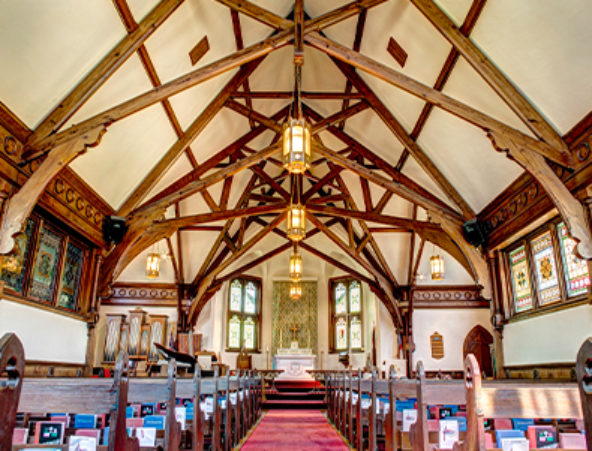 In the early 1930s, Rev. Clarence Lake of Bastrop began to hold services, and the St. James’ Women’s Guild served as the vestry. The church was hanging together by a small group of devoted people, the only Episcopal Church presence in Fayette County at the time. After WWII, the population began to rise and there were enough parishioners to support a resident clergy, Rev. Arthur Edmonds. British born, he moved to La Grange to take over the church in 1951. Sadly, he lived only six months, but the renewal of the church had begun.

The Rev. Arthur Lockhart served from 1952-1955, and the first parish hall was constructed, along with the sacristy and the office. Appropriately, the new parish hall was dedicated to the Rev. Smith, the visionary pastor who oversaw the building of the first church in 1885. Church records show only twelve active members in 1958, but by 1963 that number had doubled. Three church women started a thrift store, the precursor of what is now Second Chance Emporium. The women’s group also purchased a new organ.

Under Rev. Fuller, a new and ambitious restoration and building program was completed. Storm damage from 1977 had made repairs necessary, and in addition to repairing the belfry and restoring the stained-glass windows, an office, a new kitchen, and the Meditation Garden were added, thanks to grants from the Moody Foundation and the Texas Historical Association. The church was recognized in 1965 as a Texas Historical Landmark and was later placed on the National Historic Register.

The lumber yard adjacent to the church was purchased in 2000 to provide for a parking lot, preschool playground, and Men’s Club barbeque pit area. About this same time, St. James Preschool was started as a Mothers’ Day Out program, becoming a preschool in 2003. Prior to the church’s 150th anniversary in 2005, the church was refurbished, with the pews being removed for storage, the interior cleaned and repainted, and the wood floors refinished.

Hurricane Harvey damaged the belfry in 2017, and church growth has created a strong interest in expansion. St. James recently dedicated new office and preschool facilities, adding space for choir robes and a music library to serve its twenty-six-member choir. The church is being shepherded by a brilliant young rector, Rev. Eric Hungerford, who is full of energy and enthusiasm. And with its current parishioner number of nearly two hundred, a thriving preschool with a waiting list, and an active outreach program, St. James’ Episcopal Church is poised to enter the next chapter of her life with vigor and purpose, being faithful to her calling to, “Serve the Lord with gladness.”

The Church and its Furnishings

The interior is typical of Episcopal designs of the period, with warm wood hues enriched with brilliant color from the leaded stained glass window. The interior is composed to accentuate the altar, with secondary emphasis on the pulpit and lectern.

In addition to commissioning the plans and raising most of the money for the church, the rector at the time, The Rev. W.G.W. Smith, also designed and built the altar, lectern, communion rail, and Bishop’s chair, all of which are still in use. The windows and cross on the tower were also his selection. The pews are original, designed by Mr. Smith and built locally in the shop of Mr. Frank Reichert.

The memorial window in the south transept, “Faith,” was made in Europe and given in 1885 in memory of Judge and Mrs. Benjamin Shropshire by their children. The brass cross was given in 1887 as a legacy from Mrs. Charlotte Critchley.

The tower bell, weighing 711 pounds, was struck by the Meneely Bell Company of West Troy, New York, and hung in the tower in January, 1892. The font was placed in the church in September, 1892, and electricity replaced the original kerosene lamps in 1893.

Learn More About Our History: "The Faithmaker" > 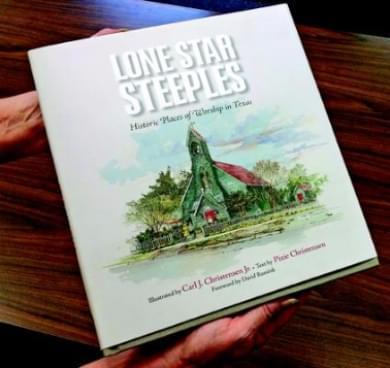 St. James is one of the historic churches featured in the publication Lone Star Steeples.

Get Your Copy Now >